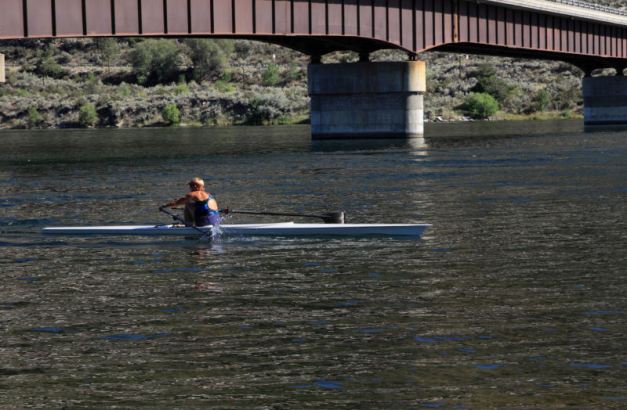 Knees tucked firmly beneath my chin, eyes steely and focused dead ahead, lips pursed, I exhaled a purposeful breath.  A simple flip of my wrist, and the oars turned from their neutral  position.   I lower my arms, digging the blades ever so gently into the surface of the river, and… deep breath, I press against the foot pedals with my powerful thighs and at the same time, lean back ever so slightly, pulling the oars to my chest.  My body is fully engaged. As I glide back along the rails of the racing scull, I can feel the wind rushing past me.   Fully extended, I glide swiftly and smoothly through the water. I feel as though I am flying, a mere nymph dancing across the rivers’ surface. Oh, this is good.  This feeling is good; this rush of speed, and power, and rhythm.  Why have I not done this before now? Another flip of the wrist, and the oars turn once again into a 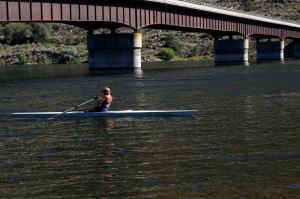 neutral position and as I slide forward on the rails, pressing my arms straight out in front of me, the carbon fiber blades feathering across the surface of the water, I once again find myself in the tucked position, oars behind and at the ready.  Push, pull, stroke, stroke, stroke.  I can feel this excitement gurgling up within me. This is completely exhilarating. Stroke, stroke, stroke…  I glance over my shoulder, I can see the shoreline zooming past as the scull dances across the water.   Stroke, stroke, stroke…  I am in the midst of a full body rush, tingling is buzzing up through my limbs, gooseflesh creeping up my neck and face.  Forty five minutes later, exhilarated and spent, my body is wringing with the moisture of exertion. I wonder, this feeling, this I’m on top of the world feeling, this I’m unstoppable feeling, is this my ever elusive “runner’s high”?  After the lesson that I received yesterday, today’s session was about putting it all together and applying what I learned.  I know I can do better and I have more to learn, but today, I feel like I took flight.

With the temperatures hovering near one hundred degrees fahrenheit, it became apparent that the only sane place to be was in the river. Earlier this afternoon, (yes, prior to the session in the rowing scull) we hopped on some old windsurfing boards, stand up paddles in hand, and toured along the shore of the Columbia River.  There is a festival happening about 6 miles down river, and as a result, the water surrounding my little town is literally choked with a plethora of motorized water vessels.  Fishing boats, pleasure crafts, jet skis, water skiers, they were all here.  As each boater zoomed past us at breakneck speeds, they left a myriad of large rolling waves in their wake.   It was a challenge to

say the least, to remain upright while riding out the waves on our small little boards.

I never really noticed stand up paddling until I was visiting Hawaii in 2009.  The best I can ascertain, is that Stand Up Paddling got its start there  (Hawaii) in the 1950’s.  The early paddlers were called, “Beach Boy Surfers” and their entire reason for being on a board with a paddle, was to better be able to photograph surfers doing their thing.   This activity has experienced a huge surge in popularity in the past several years, and again, my research indicates that perhaps this new “SUP” craze began with a period of flat water in Hawaii.  No radical “surfable” waves sent the masses out seeking thrills of a slightly different variety. In which ever way this current craze began, I am loving it!   We paddle on lakes, on rivers, up river against the current, down river and over small rapids, and I have even been known to deploy a few choice yoga moves on my board.   SUP (Stand Up Paddle or Paddling) is great exercise!  It can be relaxing, and at the same time, it is an activity that fully engages every muscle in your body. 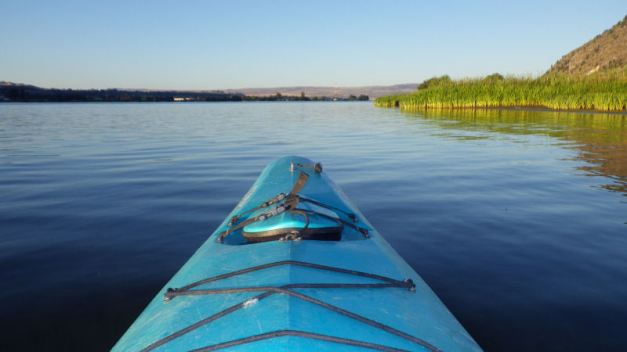 As if I hadn’t already punished my body enough with the previous two paddling events of the day, we headed out after supper for an evening kayak trip.  The temperature had dropped into the high nineties, and as the wind had picked up, (as it often does here on the Columbia River), when we launched and set out paddling through the rough wind tossed waters, conditions were less than optimal .   The chop on the river when conditions are windy can get pretty intense. Waves were breaking over the bow of our little man powered vessel.  I could hear the kayak slapping the water as we crested and dropped over each wave.  Smack, smack, smack.  Once we had made our way across the river, and beneath the shelter of Dyer Hill, thankfully, the waters calmed.   We were still plagued by the gnat like annoyance of hovering motorboats, whose captains appeared to derive a great level of glee from the prospect of creating a wake large enough to perhaps capsize said stupid kayakers.  Not to be deterred,  we continued paddling down river, and circumnavigated a group of small islands. In the process, we were fortunate to  flush a large and graceful blue heron from the foliage. We made our way back up river against the current, which although the difference in effort expended is not that noticeable, the time elapsed for distance traveled paddling down river versus up river is pretty significant.

The  low angled evening light was shimmering on the surface of the water, casting a lovely glow on the hillside towering above us.   Contented, we began the paddle back across the river toward home.  The recreational motorized vessels were lining up to make port for the evening.  Feeling one last surge of energy, we paddled like maniacs to attempt to “beat” one of said motor boats into the disembarking area.  So intent were we on our effort, that we nearly crashed into shore.

Placing the kayak paddle behind me and using it as  brace to slowly raise myself out of the cockpit, I began to have just an inkling of the muscular impact of my days activity.   As I grasped the front handle of the kayak and began the portage across the boat ramp, there was no doubt;  I had been thoroughly spanked, and I liked it.