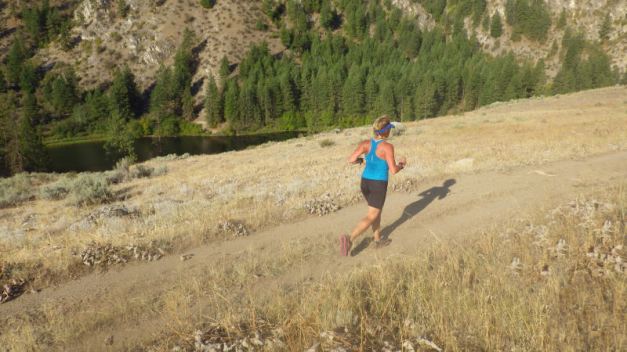 I slowed at the top of a particularly steep climb, and the wooziness overtook me.  I stopped, bent at the waist and grabbed hold of my thighs just above the knee.  Wheezing loudly, I struggled to slow my heart rate and respiration from “oh my God, we’re all going to die cuz we’re being chased by a bear”, to,  “say, isn’t this is a lovely morning jog”.   The running man, surveying my physical malaise,  casually asked me about the date of the trail race that I was considering… I gasped at him…. October.   He shook his head and said, “you’re not ready.”

My alarm went off at 5am.   I was sleeping soundly and getting up was not at the top of my list of things I wanted to do.   But, get up I did.  I  pulled on my little spandex shorts and top, laced up my running shoes, and headed out in my car to the trailhead.  I must be completely insane, but this morning, I was actually looking forward to a ten mile trail run. This route is not unlike many other trail runs in that it heads up at a freakishly ridiculous grade right along the flanks of a mountain.  This run was an “out and back” course, five miles up to a lake and five miles back.  I am nervous as I contemplate this run, but I believe that I can do this.  It is not just the terrain that has me nervous, but this is the longest distance I have run in over ten years.  That being said, the most difficult part of this outing is the intimidation factor of heading out with the Running Man of Brewster.

When I speak of the running man, I am not referring to the incredibly awful 1980’s dance move nor the 1987 sci-fi movie, but rather that one guy in every town who everybody knows as “the running man” or “the runner”.

To say that I had butterflies before beginning this run, would be a drastic understatement.  Apparently, jogging was to be our only warm up activity. I had really wanted to just “walk” through the orchard as a prelude to starting the run, but encouraged by the running man, we began our “jog” right away.

The first phase of the route travels along a one mile uphill section of old road.  The running man was right beside me pacing me, and truthfully, it was quite intimidating.  I have no idea if I was going at a comfortable pace for me or not, I was just trying to keep up and not get dropped.   He was carrying my little pocket camera, with the idea of capturing a few photos of this athletic first for me.   As we were running along, he would suddenly leave my side and sprint up ahead.   I merely continued my steady chug up the grade, and once he had positioned himself in front of me, he would snap photos.  He is an excellent athlete and an incredible runner, but as a photographer, could use a bit of help.   As I struggled by him and noticed him snatching shaky shots of my head and shoulders, I huffed and puffed at him breathlessly,  “my feet, wheeze, gasp, choke,  running pictures need to have feet”.

Pacing on this type of terrain, is clearly something that I need to work on.  This route is the training hike that we do when conditioning for backpacking.  I have hiked it while carrying weight on my back numerous times.  This is the first time that I have tried to run this route, although, the running man can be found here several days per week.  Dry heaves aside, I was able to persevere and run this entire route. I am pleased with myself. This was the hardest run I have completed.   I had conversations with Phil (aka, the running man) about my running technique, and asked for suggestions.  He told me that the biggest change I could make would be to slow down on the steep uphill grades.  In light of the dry heaving, this really does make a lot of sense to me… Now, if I could just incorporate the theory into reality, then I would be going somewhere!   That seems to be the hardest thing for me.  I can know something intellectually, but the actual application into my exercise regime requires something more akin to a sledgehammer atop my ever so stubborn and rock hard head.  Sigh.

Prior to this run, I had already come to the conclusion that I was not going to attempt the 25K trail run this year.  When I began to ramp up the running mileage in my training program, it became clear to me that I should wait another year.  The Mt. Spokane run, at 15.5 miles heads up and over (not too surprisingly here), a mountain.  While I am enjoying pushing my athletic limits, I don’t want to injure myself, nor be a liability to the race officials. However,  I really do have my sight set on running a longer race this fall or winter.  Perhaps a simple and well supported half marathon will do the trick.  Today, when the Running Man told me that I wasn’t ready, if I had not been so completely absorbed with trying not to vomit, it probably would have made me mad.     I know I’m not ready to be competitive in that race.  Heck, I probably never would be competitive in that race against anybody besides myself.

But here’s the thing, if I wanted to enter that race in October, I could. Unlike the running man, I only need to finish the race to consider it a successful venture.   There are those dedicated and über athletic folks, the running man included, who really cannot conceive of why anybody would consider entering a race where they don’t have a chance of winning.    What they don’t get, and what I hang onto for dear life, is that just showing up for me, is winning.   Not giving up for me is winning.   Not giving in to the temptation to let one rest day turn into a week of rest days, for me is winning.

2 comments on “You’re Not Ready”