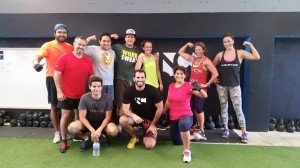 The 2016 Crossfit Open is well under way. When I declined to compete during 2015’s Open competition, I fully believed that this would be my year. A lot can happen in a year.

Over this past year, I watched someone that I loved deeply, slowly wither and die. Death and dying can be  a nasty ugly bitch.  I have been consumed with grief, guilt, and PTSD, and it has been paralyzing.

In the last months leading to my Grandmother’s passing, her care required 24/7 monitoring. I could not leave the house unless I hired someone to stay and care for her. I tried to keep the ladies fitness group going, but I could not find reliable help, and I had to put the group on hiatus.

In anticipation of the awesome workout room in the new house we are building, I have been slowly amassing gym equipment. This allowed me to keep some semblance of fitness during a tough time, and my drive and motivation were still quite strong until just 5 months ago when my Grandmother left this world.

Her leaving was not peaceful. It was not calm. Her last months were filled with anxiety, confusion, and dementia induced difficulties.  It wasn’t any easier watching the distant family members show up and grope and grab and lay claim to my precious Grandmother’s belongings.

To say that this event caused dramatic changes in my life would be an understatement. In one day, I not only lost my beloved Grandmother, but my job and what had been my home for the past five years.

The emotional abyss has been consuming. I have been fighting to rise above it all , but just one month ago, I lost my dog. Again, pile on the grief. If I was Rich Froning, I would no doubt be able to utilize this pain and sadness to become even more badass; however, I am a mere mortal, and a middle aged one at that. I have lost fitness. I have lost my motivation. I have become soft.

Sign ups for the 2016 Open came and went. As I could barely muster the motivation to tackle the 2 hour round trip drive to the box for a mere WOD (workout of the day), I chose once again, to wait.

Time takes time and I don’t think that there is one correct formula for when a person will emerge from the shroud of grief. Truthfully, I am not there yet; however, I am seeing glimmers of light through the fog that dominates my days.

Which brings me back to Crossfit, back to my beloved box, and “Fat Jackie”. It is not unusual for me to attempt the WOD’s at home. The 2 hours of driving really sucks. On Thursday, my box put up a 15 minute AMRAP of Jackie. I have been wallowing in self loathing and finally, this was a little nugget to pluck me from the jaws of despair.

I grabbed my barbell… hung the pullup bar in the doorjamb, and got down the rowing machine. In for a penny…. in for a pound. A year ago, I had worked diligently and could go unbroken for the fifty ass breaking thrusters that comprise the middle element of the sweet little triplet also known as Jackie. On Thursday, I had to put the barbell down after a mere ten repetitions. Ugggggh. So, I broke it up… but I did the work, and something subtle happened. I felt better. It is no surprise that I felt better physically, but I also felt better mentally.

I watched the announcement of 16.2 (the second workout of the crossfit open) and made the decision to drive to the box the next day.

Toes to Bar, Double Unders, and Squat Cleans. I can do TTB and DU…. but I cannot yet link them efficiently. I really needed a good workout more than I needed a good score, so I decided to do the scaled version. One wonderful thing about being my age, is that Crossfit HQ gives us a little break in the Open Workouts. Age 55-59, the scaled version called for sit-ups and single unders as well as lighter weights for the cleans.

Imagine my surprise when I made it to the final round. 105 Pound Squat Cleans…. A year ago, I could have easily finished the 7 reps for a score of 430. But, out of shape, weak, and huffing and puffing for all I was worth, I tried and failed 4 times before I finally hit one good rep for a score of 424.

I’m not where I want to be right now, but I think I am back on the right path.

I love Crossfit and I am NOT competing in the Open.

I have not written a blog post in a long time. I would like to offer an explanation of sorts. I am treading water in my personal life, and the blog has fallen to the bottom of the priority list.   Rest assured dear friends, my fitness is still a priority.  The ladies group is going strong and growing in numbers, and my obsession with health, fitness, and now Crossfit is alive and well.

I know it is crazy.  This obsession that I have with all things Crossfit.  Truly it is in my head at the MOST inappropriate times (I won’t elaborate, but trust me on this).  It is in my head all of the time.   I have been a member of a Crossfit box for just over a year now.   During that time, my body has performed athletic feats that I never dreamed possible.

This qualifies as a “before” shot. I actually got bigger than this before I hit bottom.

Striving to be healthy in mind, body, and spirit

For a former fat girl who just 5 years ago weighed in at 217 and 49 percent body fat, the things that I am doing with my body are no less than miraculous.   Pullups.  Strict freaking pullups.  Kipping pullups, Toes to Bar, Knees to Elbow.  Okay, I am no master of these skills, but I can do them.  This to me is miraculous.  There is something so special about the Crossfit community and friendly competition that thrives there.  I am inspired all the time to push harder, run faster, and lift heavier.

Today is the day that Crossfit Headquarters will announce the first of 5 workouts that constitute the Crossfit Open. (If there is a snowball’s chance in um, you know where, that you don’t know about the Open, It is the first in a step of competitions that lead to the Crossfit Games)  The Open is really cool because a  little “Ms. Nobody” like me can compete against absolutely everyone.  There are no other sports that I know of where an absolute neophyte is allowed to compete against the elites.   Let me clarify here, I have absolutely no chance of winning.  Never in a million years, it just is not in the cards for me.  That being said, there is this little spark of a childhood fantasy that lives in the dark recesses of my mind.   In my fantasy, I will compete and emerge from the shadows a victor.  I will surpass everyone’s expectations of me.  I will prove my doubters wrong, even if the biggest detractor is me.   That for me, sums up the magic of the Crossfit Open.   I am as excited as anybody to watch the workouts as they are revealed.  I will grunt and push and pull alongside everyone else at my box trying to get through the workouts, but this year I will not compete.

So, why not me.  Why not compete this year? Truth? My desire to compete has been eclipsed by too much going on in my life.

1.  We were burned out in the WA wildfires last year, and are in the process of building a new home.

2. I am a full time caregiver for an aging relative who is currently in hospice care and needs 24/7 monitoring.

3. My dog (yes, really) has gone blind and lost the use of her hind legs this past year.   This means incontinence and diapers and using a wheelchair for her.  Very high maintenance and difficult to leave her alone.

I am a big proponent of the philosophy that you will make time for the things that are important to you.  If it is not important, you will make excuses.    The truth is, if I wanted to compete in the Open badly enough, I would find a way. At this point, still being fairly new to the sport (yes it is a sport), and with so many distractions stealing my focus, I am choosing to wait.

With all the facebook and pinterest “fitspo” telling me that I suck if I choose to make my life outside of the gym a priority, that is precisely what I am going to do.  You know what?  It is okay.  It is my life, my choice.  If I am lucky, the Crossfit Open will be waiting for me next year.  That little spark of fantasy is not dead within me.  It lives and burns brightly encouraging me to keep on keeping on.

But, at 5pm tonight, along with all of my crazy Crossfitting compatriots, I will be glued to the net, watching the announcement of the first workout in the 2015 Open.