I was already awake and feeling anything but peaceful when the alarm went off at 5 am.  The alarm tone is a lovely little “new age” melody complete with chirping birds.  Today, I wanted to take those damned cheery little birds and slam them against the wall. Sometimes, to get through my day, I have to seriously channel the “nasty” part of my psyche. This morning it became evident that I was going to have just such a day; I was going for a bike ride with the dudes.  I normally love riding my bike.  I love the feeling of speed and power, the sunshine on my back, and the wind rushing past  my face. The media portray bike riding as a calm idyllic activity, lovely paved pathways lined with flowers,  senior citizens pedaling leisurely with  baskets full of market treasures,  and kid’s touring around their neighborhoods.  Truthfully, I seldom indulge myself in this type of “gentile” cycling, and today was no exception.  As I said, this was a ride with the boys.   Truth be told?  The scared little girl part of me DID NOT want to go.

Why is it so hard for me to find girls to play with?  Why do I have to constantly suck it up and take backseat in some ridiculously gnarly and heavily testosterone laden gruel fest? Why? Why? Why?  And while I’m on my ranting rampage, thank you very much Tour De France for turning every man on a bike into a Lance Armstrong wannabe.  Damn.  A girl doesn’t stand a chance.

As we were preparing to hop on the bikes and head out for our ride, one of the guys says, “I’ve got the ride all mapped out, 28 miles and 2800 feet of elevation gain“.  He was excited about this.    So, apparently this route he has chosen travels along every little side street with a hill.  Every tiny little bit of elevation gain that can be found in our local area, we are going to climb it.   While I am certain that my two über fit hill climbing machine compatriots are fantasizing that they are ascending the grand Col du Tourmalet, cheering fans urging their lithe muscular bodies to the top, I am meters behind, mashing my gears and stubbornly refusing to granny gear up.  So, do you think it made me feel any better when one of said dudes, cycles back down the hill to let me know I’m almost to the top?  Yeah, me neither.

Surprisingly, it was on the downhills rather than the climbs where the biggest gap opened between the lead dude and the lone token female (yep, that would be me).  When I was younger (how pathetic does that sound?), I routinely pushed the envelope.  I had a need for speed and in 1997, while riding in  the RAMROD (Ride Around Mount Rainier in One Day, just a little bike ride, 154 miles, 10,000 feet of gain), I reached a downhill max near 60 miles per hour (at least that is what my bike computer recorded).   Since that time, I have had several debilitating bike crashes.  One of which resulted in three shoulder surgeries!  A little older, a little wiser, and a lot more cautious, I find myself riding my brakes on the downhill portions of a ride.  Am I missing out on some thrills?  Absolutely, but I would like to live to ride another day.  But, that is just me.

Heading into some light winds on a four mile flat stretch of highway, we formed a little paceline to take turns pulling and drafting.   My bike computer, having bit the weeny a few months back, didn’t give me a good picture of my speed, and as a result I overestimated the amount of effort necessary to pull into the wind.   Properly chastised for leaving my poor resting compatriot in the proverbial dust on the side of the road, I adjusted my intensity down just a notch. These miles flew by with ease and all too rapidly we found ourselves at a “dirt road” section of the route.  I took one look at the ruts and gravel and said, “hey guys, I’m not going up there, I would hate that”.  I encouraged them to take the dirt road themselves, and insisted that I would be fine retracing our route along the highway.  It should put us all back at roughly the same spot at the same time. 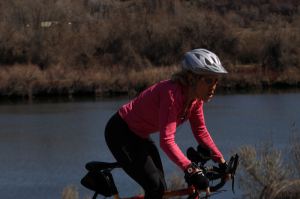 I dropped down onto my aero bars and flew along the 4 mile stretch of open highway.  Traffic was light, and with a small tailwind, I made great time.   I made the climb up our last two mile long hill, and had turned around to do a “hill repeat”.    I only made it about 1/3 of the way down when I met up with the guys on their way up.   I quickly turned my bike around, and since my muscles and lungs had gotten a great rest break on the way down the hill, I jumped up out of my saddle and lithely sprinted to the top of the hill.   Not to be outdone, my companions likewise stood up and sprinted for the summit.  Seriously, I complain about the brutish competitive nature of the guys, but apparently, I’m not much better in that regard.  I had thought my brief stint in “competitors anonymous” had cured my need to thrash my companions.  Given that I had all but sent an engraved invite to my testosterone laden echelon, apparently I have a ways to go.

Home, I mixed up a couple of green smoothies, and we chatted about the ride.  Apparently, I had a doubter.  One of the dudes had voiced that he didn’t believe there was any way that I could have made my way up the highway and up the hill ahead of them.  That I just didn’t have the time to make that much of a gain on them. Hehehehe…… wait for it….   BUT I DID!   Having come from an emotional place prior to the ride where I really just wanted to give in to the tears and stay in bed,  this was my podium moment of the day.  I still wish I could find some girls to challenge me, and  I definitely don’t  have the testosterone factor going for me, but today, this was a tour of triumph and not tears.

Curious about drafting and why cyclists do it?  The Exploratorium’s Paul Doherty talks about drafting: If you’re a following a bicyclist and can move into the wind behind the front bicyclist, you can gain an advantage. The low pressure moves you forward and the eddies push you forward.”  Surprisingly drafting not only helps the bicyclist following the leader, but the lead cyclist gains an advantage as well. Paul explained, “The interesting thing is by filling in her eddy you improve the front person’s performance as well. So two people who are drafting can put out less energy than two individuals (who are not drafting) would covering the same distance in the same time.” While the lead cyclist gains some advantage in this situation she still needs to expend much more energy than the cyclist who is following.